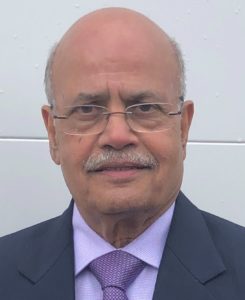 He was involved in various real estate projects in Assam, West Bengal & New Delhi since 1974 till he migrated to Canada in 1988. He was also involved in global commodities trade having offices in Singapore, Hongkong & Myanmar.

He has successfully developed & managed Canadian Real Estate since 1996 under ‘Kothari Group’ of companies of which, Mr. Kothari is Chairperson. The group has built three hotels (Four Points Sheraton in Cambridge; Hampton Inn & Suites (Hilton) in Winnipeg & Hyatt House in Winnipeg). The group’s latest hotel (Marriott Town Place Suites) at Hamilton is expected to be ready for operation by September 2020. Hyatt House in Winnipeg is first Hyatt House in Canada. The Group has planned two more hotels in Markham & one in Victoria (B.C.).

The Group has large interest in condominium developments in Winnipeg. At present, Group has more than 400 condominiums under construction in Winnipeg apart from several hundreds already built & sold.

In 2014, The Group founded a real estate Mortgage Investments Fund which has been giving handsome dividends of more than 8% per annum to its Investors since inception which is more than returns given by most of the investment funds in Canada.

Recently, Mr. Kothari was able to successfully establish BITS69 Scholarship Fund, an endowment fund at his Alma Mater (BITS, Pilani) for perpetual annual scholarships to five deserving candidates with initial capital of 1.5 crores contributed by him & some of his peers at BITS, Pilani (India).