Canada India Foundation (CIF) Global Indian Award for 2017 was presented to Baba Ramdev of Patanjali Yogpeeth. The glittering Gala was held at the International Centre in Mississauga (Ontario) on Monday, June 26, 2017. 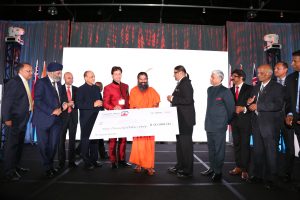 Baba Ramdev, a globally acclaimed Yoga Guru has popularized Yoga internationally. He has millions of followers and presides over a business conglomerate valued at almost $ 2 billion.

His Patanjali brand has expanded into education with Patanjali Ayurved College and Hospitals, Patanjali University, Yoga Institute and Research Centre and a Pharma Manufacturing Unit, among other ventures.

Born as Ramkrishna Yadav in January 1965 at Ali Saiyadpur village in Haryana (India), Swami Ramdev adhered to a life of asceticism (sanyas), retreated to the Himalayas for a few years and then settled down in Haridwar, one of the Holiest cities in Hinduism. Under his guidance, a large number of people have been alleviated from pain and suffering, thus leading to healthier and more purposeful lives.

The $ 50,000 donation, given to a Charity of Award Recipient’s Choice goes to PYP Yog Foundation.