The Who’s Who of the Indo-Canadian community and a number of prominent personalities from the political sphere participated in the Gala. Also, present on the occasion were well-known academics, government officials, along with 500-odd business and community leaders. Prime Minister of Canada, Hon. Justin Trudeau, sent a video recording congratulating Sparsh. 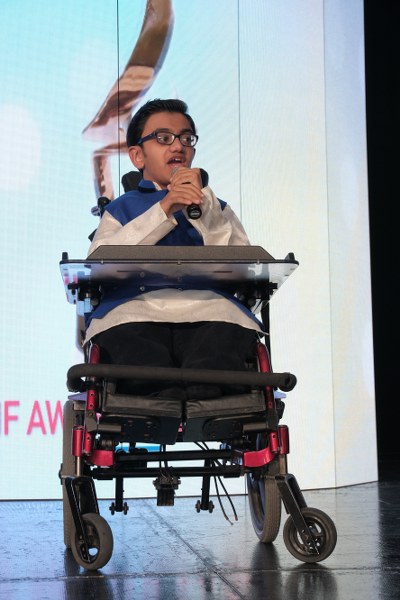 Sparsh Shah was born on the 1st of May 2003, in Iselin, Middlesex, New Jersey, United States. His parents are Jigisha and Hiren Shah who have been there for him from the start and imbibed values into Sparsh that have helped him become the person he is today.

Sparsh means to ‘touch’ and no one else has lived up to their name as much as Sparsh has in just 15 years. Sparsh himself says that he wants to touch the hearts of everyone he meets, and his dream is to inspire the world and perform live for an audience of a billion people.

Sparsh has osteogenesis imperfecta, a brittle bone disease in layman’s terms, however, that has not stopped him from becoming a motivational speaker, Sparsh is also known as a rapper Purhythm, a combination of pure and rhythm as he is a clean rapper and as he puts it ‘all about the rhythm’.

He was born with 40 fractures and despite doctors telling his parents that he wouldn’t survive long, Sparsh has beaten all odds. With 19 screws and 2 rods in his back and over 130 fractures over his life, Sparsh and his family has persevered through it all.

Sparsh’s parents discovered his musical talents early on when Sparsh would sing along to the radio in car rides and even correct the singing of his parents if they were out of tune. They enrolled Sparsh at the age of 6 to learn Indian classical vocal training and then American vocal training at the age of 9. He then became the first to coin the term ‘raga rap’ for his unique fusion of Indian classical singing with American rapping. Sparsh launched his first cover album, “Tribute To Eminem” in October 2016.

Canada India Foundation congratulates Sparsh Shah for being the CIF Global Indian of 2018 and is proud to recognize the contributions of a rising star that is just 15 years old.