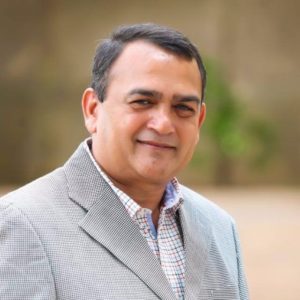 Nick – Niranjan – Ladani is Founder and Executive Creative Director of Canada and India based a strategic brand agency DNL Core Design Inc. He has over 25 years of experience in advertising, branding, television production and designing brand experience.

His entrepreneurial philosophy is simple – everything starts with one dot, and when you connect the dots it become a line. Nick believes that to truly transform a product, or a service, one must transform its core.

As a designer, he adheres to a simple adage – Good Design is one that works. He believes that good design is not about appearance, it is about utility. No big words. No jargon. Human-to-human, simple design solutions.

A restless, creative soul, he ventured into television production and assisted the legendary Ramanand Sagar as assistant director on tele-serials Krishna and Alif Laila. Venturing out on his own, Nick launched and successfully completed 260 episodes of the Marathi TV serial Mahasweta production in Mumbai with legendary Lata Mangeshkar, Hridaynath Mangesker, Shulbha Deshpande, Asha Lata, where his role was production, finance of the project and marketing of the own TV serial.

After a brief stint in the entertainment industry, Nick returned to his forte – branding; and launched his design studio in Vadodara. Here, he was involved in evolving a creative strategy and launching advertising campaigns for Netlon (Murugappa group), GIPCL, Hindustan Pharma, Vasu Pharma.

Subsequently, his restless creative soul took him to New Zealand, where worked on one of New Zealand’s biggest brands, Gilmours as a senior creative designer. He also worked on Coca Cola and Baskin Robins.

After a few years in New Zealand and Australia, Nick immigrated to Canada. In Canada, Nick started his own design studio – the DNL Core Design – with a branch office in India. In Canada, the highlight of his achievement is to conceive the outreach campaign for Indian Prime Minister Narendra Modi’s visit to India in 2015 He has worked on the Narendra Modi campaign while Prime Minister Modi visited Canada. His other clients include UCMAS, Canada India Foundation, among many others.

In in India he is working with ISRO (Indian Space Research Organization) and Scanpoint Geomatics Ltd to create a brand of IGiS an Indigenous GIS and IP software and the rebranding of Jade Elevator to transform the company into a global entity.