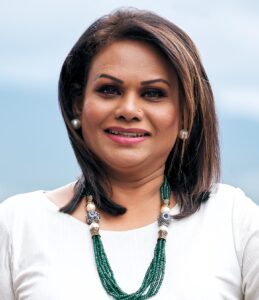 Hema Bhatt is a passionate leader and currently the Vice President of Natu’oil Services Incorporated – a premier supplier of edible oils and feed energy supplements. Hema’s entrepreneurial streak began with her first venture ‘Moms for Moms’ with a simple yet brilliant idea. An honest desire to help women and provide people with a healthier lifestyle, Hema employed a few women for environment friendly packaging of healthy foods to be given as gift baskets at festivals.

In 2003, Hema together with husband Haresh and daughters Dharinee and Nikhita came to Canada and began importing soaps for sale to dollar stores and later Palm Oil. Natu’oil was an exemplary venture started by Mr. and Mrs. Bhatt with humble beginnings from the basement of their home. Today Natu’oil is one of the largest importers of packaged palm oil and energy supplements, and a clear leader in introducing sustainable refined palm oil in North America. Headquartered in Port Coquitlam, Natu’oil global reach extends to Malaysia, USA, Singapore and India.

Hema has numerous awards and accolades in the Business Excellence sector to her name. Aside from being an accomplished entrepreneur. Hema Bhatt is also a philanthropist and continues to ensure the active participation of Natu’oil Services in supporting both the local community, as well as, communities abroad. The culture of caring was present from the day Natu’oil Services began operations. The company supports and donates to the following  causes; The Terry Fox Foundation, Miracle Connections (support services for the Bhutanese- Canadian community), SHARE Family and Community Services Society Food Bank, Eagle  Ridge Hospital, and the Power of Hope music program for incarcerated youth, Gujarati Society of British Columbia, Indian Summer Festival, and Medical eye camps in India. The latest recipients being City reach care society and RCH Hospital supporting the homeless and low-income families and frontline workers during the COVID – 19 pandemic. Hema is also a tenacious and resilient entrepreneur who supports UN Women, Shakti Society and believes in women empowerment.

Hema has proven her metal time and again in various situations. She’s a woman of substance and plays a huge role in the development and growth of Natu’oil. Despite the numerous challenges she was faced with, she never gave up and came out stronger and wiser. Hema strongly supports gender equality and wants more and more discussion around the subject. She vehemently supports UN Women, Shakti Society and believes in Gender equality and Women Empowerment across borders.  Another new initiative which she accepted was to be an Executive Producer for a documentary that sheds light and awareness on numerous minors being lured into the sex trade every year. The documentary titled “It’s Happening Right here” is set to be released in the Fall of 2020.

Hema was bestowed an Honorary Paul Harris Fellowship award in 2019 which is one of the highest honours Rotary can bestow upon a person. Recipients are Rotarians and community professionals, in recognition of their outstanding contributions, exemplifying the highest ideal in Rotary in placing “SERVICE ABOVE SELF.”

Hema along with Natu’oil have recently been awarded the Community Champion Award by the City of Port Coquitlam.

Being an immigrant herself she knows the hardships that immigrants struggle with and as such has volunteered to be a Mentor with the Immigrant Employment Council of BC.

Her credentials further include the following honours to her name: